Phobos, one of Mars’s moons, passes between Mars and the Sun.

There was a solar eclipse last month. Did you miss it? That could be because this eclipse was viewed from Mars!

The eclipse happened on April 2 when Phobos, one of Mars’s two moons, passed between the Sun and Mars. The event was captured on video by Perseverance, a rover (vehicle) that landed on the Red Planet in 2021. NASA sent Perseverance to Mars to look for signs that there was once life on the planet. But the rover’s fantastic camera makes it ideal for viewing an eclipse, too.

Perseverance captured video of Phobos as it passed in front of the Sun. Some people said that the tiny moon’s lumpy surface made it look a bit like a floating potato! Phobos is about 157 times smaller than Earth’s moon, so the eclipse lasted only about 40 seconds. (Solar eclipses on Earth last a few minutes.) But scientists were thrilled to see something that humans may never get to witness in person.

“I knew it was going to be good, but I didn’t expect it to be this amazing,” said Rachel Howson of Malin Space Science Systems in San Diego. Howson is one of the operators of Perseverance’s camera.

Phobos isn’t going to be around forever. Scientists say that gravity from Mars is pulling the small moon toward Mars. Every time Phobos orbits Mars, it gets closer to the planet’s surface. Eventually, Phobos will crash into Mars. But that won’t happen for tens of millions of years, scientists say.

It’ll be a while before the potato moon gets mashed. For now, it’s given us an amazing video.

A planet needs to have water for life as we know it to exist. Scientists have found some water beneath the surface of Mars. They’ve found no proof of life—yet.

Eclipses can be seen from Earth, too! An eclipse occurs when one body in space, such as a moon or planet, moves into the shadow of another body.

What’s the difference between a solar eclipse and a lunar eclipse?

During a solar eclipse, the Moon blocks sunlight from reaching Earth.

The Moon orbits Earth, and sometimes the Moon moves between the Sun and Earth. When this happens, the Moon blocks the light of the Sun from reaching Earth. This causes an eclipse of the Sun, or a solar eclipse.

Total solar eclipses happen every 18 months and can be viewed somewhere on Earth. During any kind of solar eclipse, it’s important not to look up at the Sun without proper eye protection.

During a total lunar eclipse, Earth blocks sunlight from reaching the Moon.

Earth orbits the Sun. When Earth moves between the Sun and the Moon, Earth’s shadow falls on the Moon. The giant shadow of our planet blocks the sunlight that’s normally reflected by the Moon. (Sunlight is what makes it look like the Moon is shining.) This is a lunar eclipse. A lunar eclipse can happen only when the Moon is full, and it can be viewed only at night.

If you want to know when the next eclipse can be seen from where you live, check out an almanac!

Get Out Your Glasses! 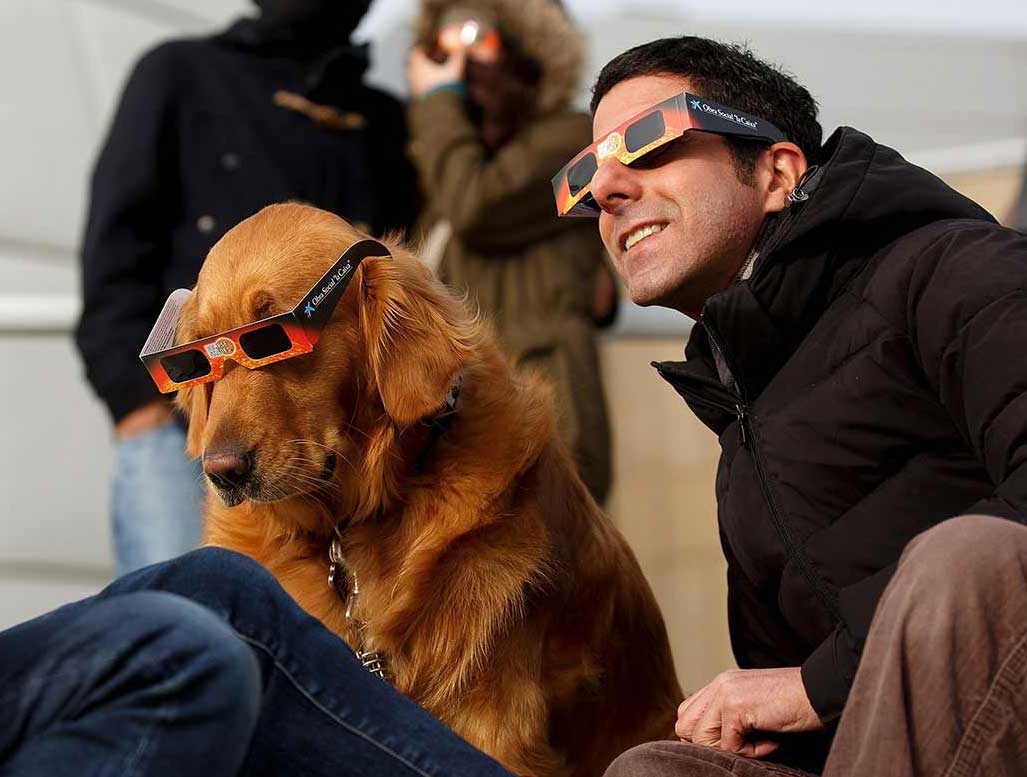 What does a solar eclipse look like from Earth?

: an object (such as a moon) that moves around a much larger planet

Toys That Make Less Trash
It’s Earth Day, and Mattel has a present for our planet.