Hyundai’s new cars are called UMVs, and they don’t need roads to get where they’re going! 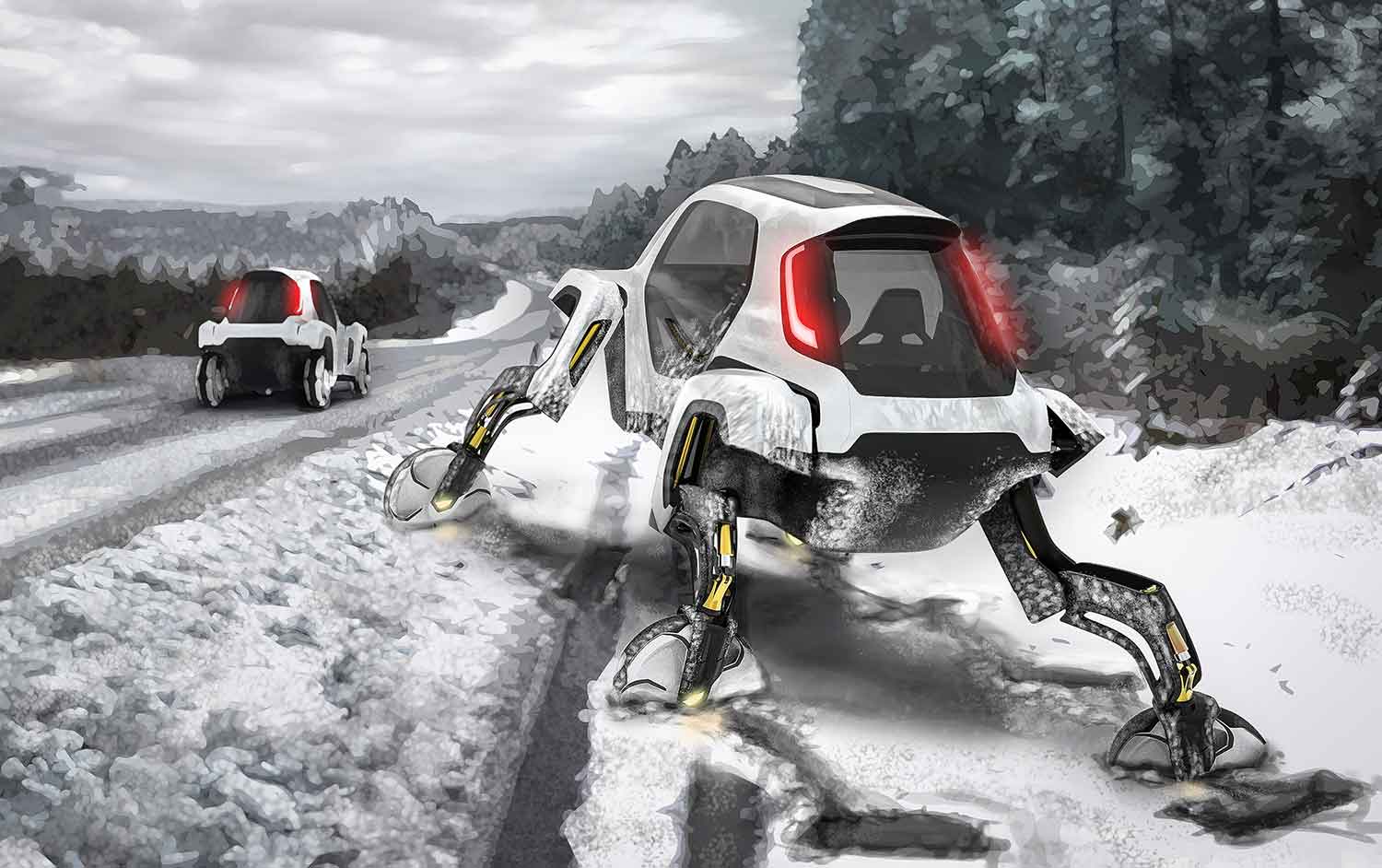 This art shows how the Hyundai Elevate might work on and off the road.

Cars are cool when they drive, but what if they could also walk? Hyundai, a company that has been making cars for many years, plans to build two types of vehicles that are half car, half walking robot!

Hyundai calls these cars Ultimate Mobility Vehicles, or UMVs. When they’re on smooth roads, UMVs ride on their wheels, like any other car. But when they reach someplace most cars can’t go—like steps or a pile of rocks—they grow legs! Picture a four-legged robot with a wheel at the end of each leg. The legs can bend and stretch, while the wheels can turn all the way around, allowing the vehicle to go forward, backward, side to side, and even up.

Hyundai introduced the first of these vehicles, called the Elevate, in 2019. According to the company, the Elevate can climb a 5-foot (1.5-meter) wall or step across a 5-foot gap. Hyundai says the Elevate could be used to rescue people after natural disasters, like earthquakes. It could also help people with disabilities. For example, if someone can’t get down their front steps, the Elevate could go right to the top of the staircase to meet the person where they are!

The other vehicle, called the Tiger X-1, was introduced in 2021. It’s similar to the Elevate, but it doesn’t carry people. Hyundai says the Tiger could take supplies to people who are waiting to be rescued after earthquakes. It could also be used on construction sites, or even to explore other planets!

So far, both the Elevate and the Tiger are concept cars. That means they’re still being developed. But in 2022, Hyundai opened a facility in Montana where it will build and test versions of these UMVs. The company hopes to someday put them on the road—and beyond.

If you’re a Star Wars fan, you may remember a walking vehicle called the AT-AT! 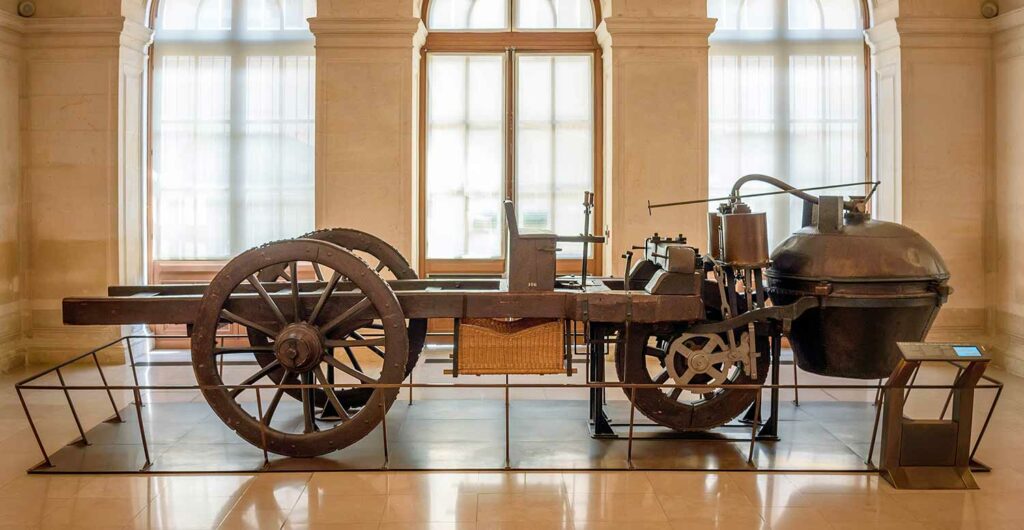 This automobile was invented by Nicolas-Joseph Cugnot in 1770.

The first true automobile was invented by Nicolas-Joseph Cugnot in 1770. It could travel at about 2 miles per hour (3.22 kilometers per hour). Instead of running on gasoline, the car burned wood for fuel. The driver had to refuel every 15 minutes!

Why Drive When You Can Fly? 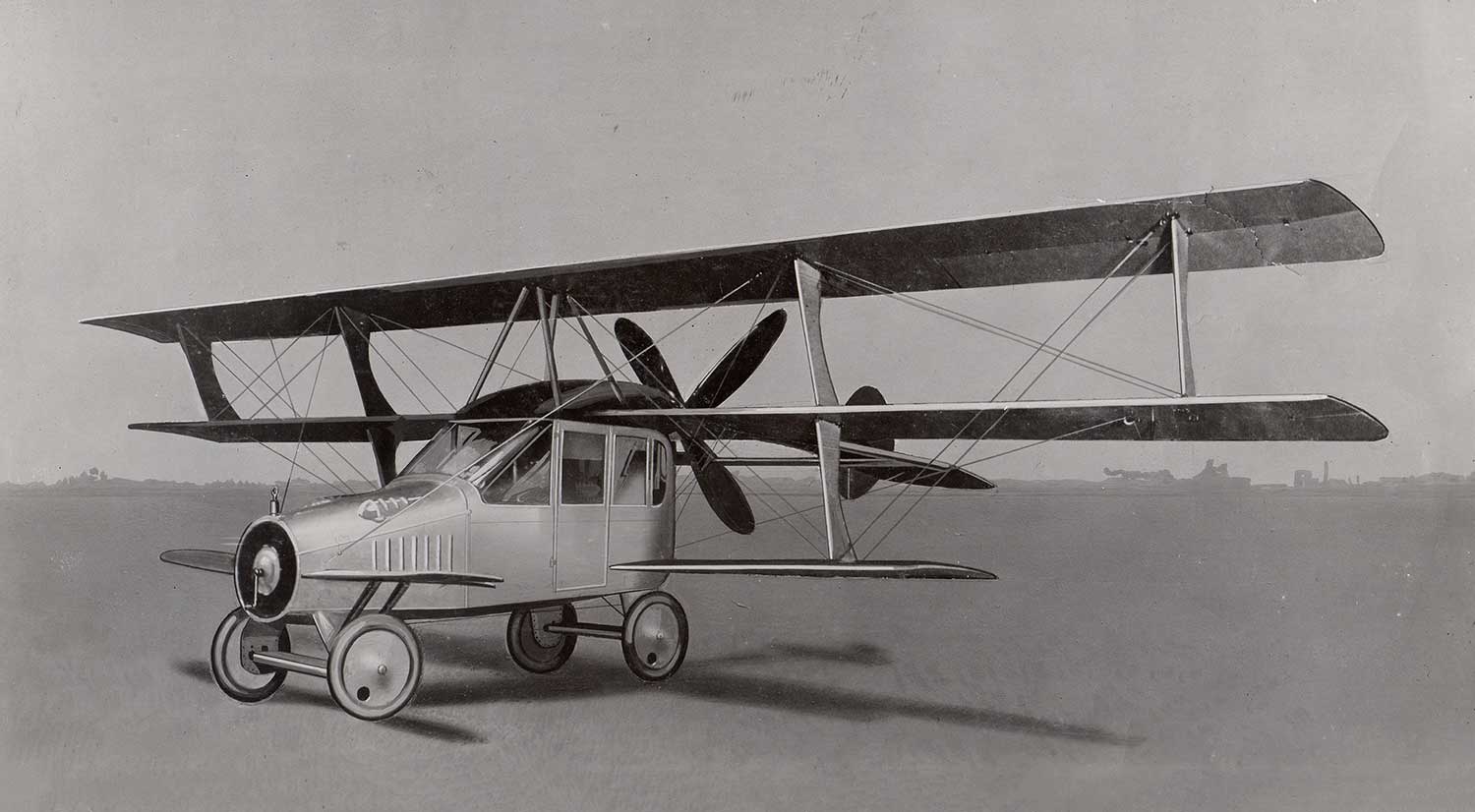 The Curtiss Autoplane was invented in 1917.

Wouldn’t it be great if cars could fly? Well, some cars can!

People have been trying to invent flying cars for more than 100 years. In 1917, Glenn Curtiss tried to invent a vehicle that could travel on the road and in the air. He called it the Autoplane. Curtiss got the Autoplane off the ground, but it was never able to fly high in the air.

After Curtiss, other people invented their own flying cars. All these vehicles had wheels for the road. Some had removable wings, while others had propellers, like helicopters. None of these early flying cars was used widely, though.

Today, several flying cars are available to buy. So why aren’t the skies filled with flying cars? Well, for one thing, flying cars are very expensive. Also, think about what it takes to make our roads safe. We have speed limits, stop signs, red lights, and more. Before leaders can allow everyone to start driving through the sky, they’ll need to figure out how to manage all that new air traffic safely.

Cars of All Kinds

Can you believe this is an actual car?

How many answers do you know?

Thrill Rides
What was the very first roller coaster like?

Zeus is the world’s tallest living dog, and his family loves him for it!