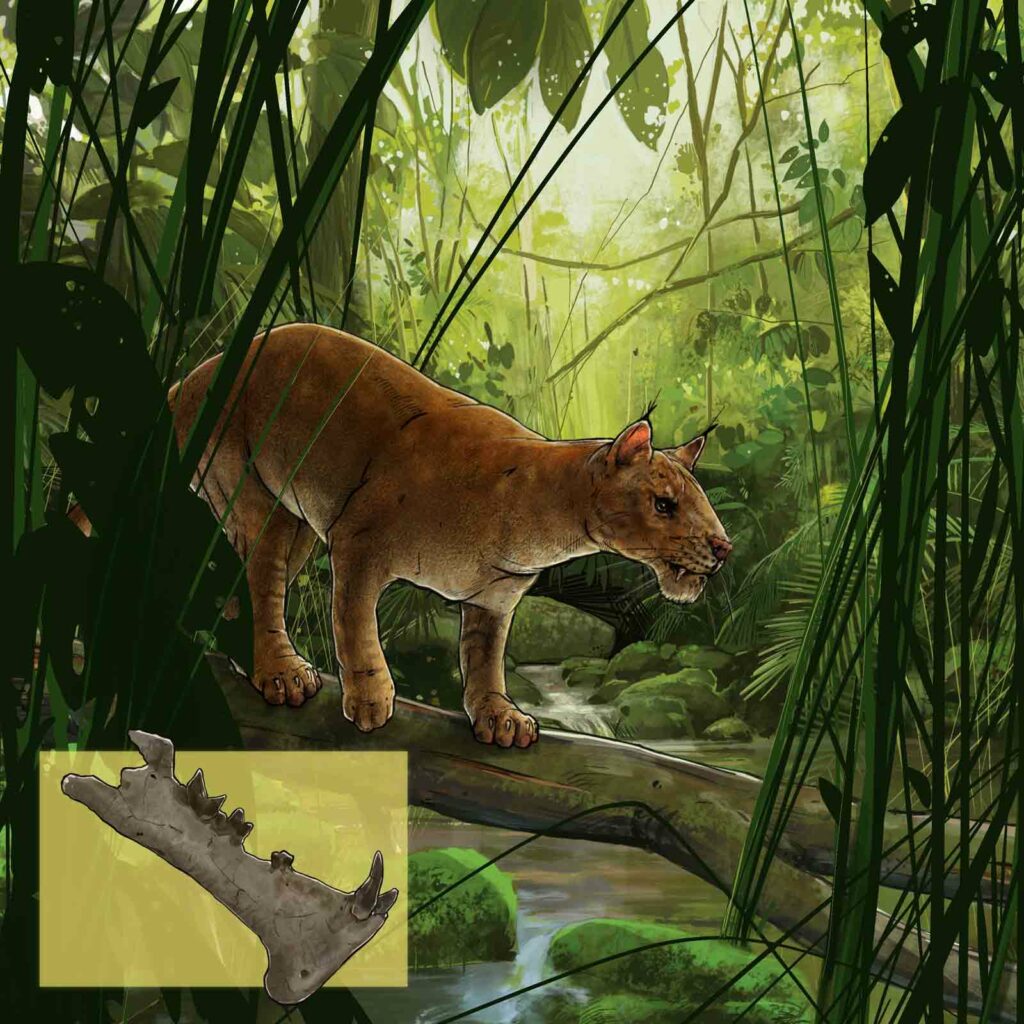 Scientists think Diegoaelurus vanvalkenburghae may have looked something like this. A fossil of its jawbone is shown in the box.

Sink your teeth into this: Scientists have discovered a new species of saber-toothed mammal that lived about 42 million years ago! The animal, which scientists named Diegoaelurus vanvalkenburghae, lived in forests where San Diego, California, is located now.

Known for their long, tusk-like upper teeth, saber-toothed animals were hypercarnivores, meaning their diet was mostly meat. These mammals had the tools to kill. In addition to their enormous fangs, some of their other teeth could slice right into muscle!

Scientists believe that saber-toothed mammals first appeared several million years after the dinosaurs died out. Diegoaelurus vanvalkenburghae was one of the earliest. Unlike many other saber-toothed mammals, this one was fairly small. It was about the size of a bobcat (about 25 pounds, or 11.3 kilograms).

While Diegoaelurus vanvalkenburghae probably looked a bit like a cat, scientists say it wasn’t closely related to today’s big cats, like lions and tigers. And it was very different from another, more famous saber-toothed mammal, Smilodon. Smilodon (sometimes mistakenly called a saber-toothed tiger) was a distant cousin to today’s cats. It was much larger than Diegoaelurus vanvalkenburghae, with even larger teeth.

You don’t have to worry about coming across those massive fangs, though. The last saber-toothed animals went extinct about 8,000 years ago. But if you have a cat, then there’s a hypercarnivore in your house! 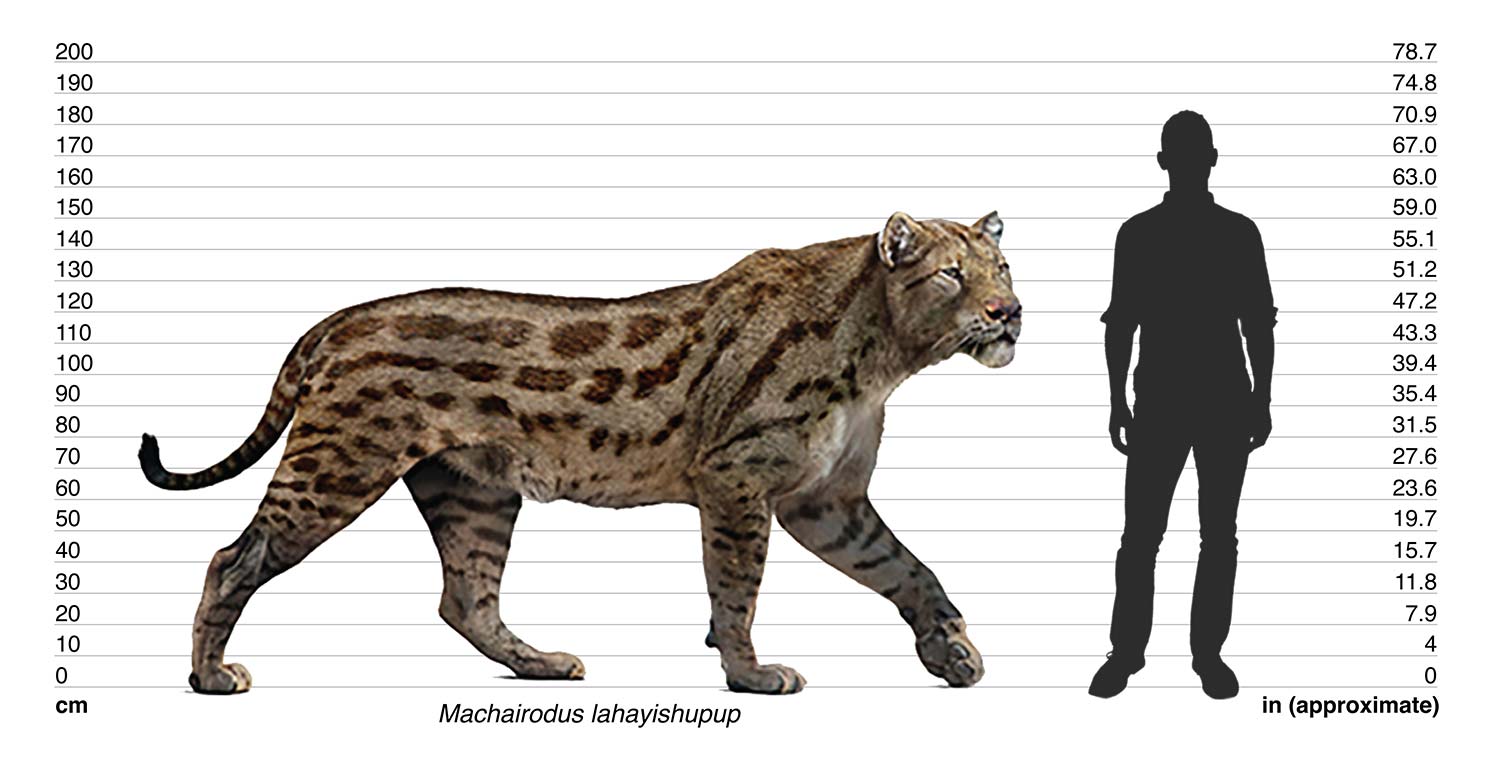 In 2021, scientists identified another saber-toothed animal. This was a big one. Scientists say Machairodus lahayishupup, which lived between 5 and 9 million years ago, was one of the largest cats in history. It weighed up to 900 pounds (408 kilograms)!

Above, check out how big it was compared to a human.

What Big Teeth You Have! 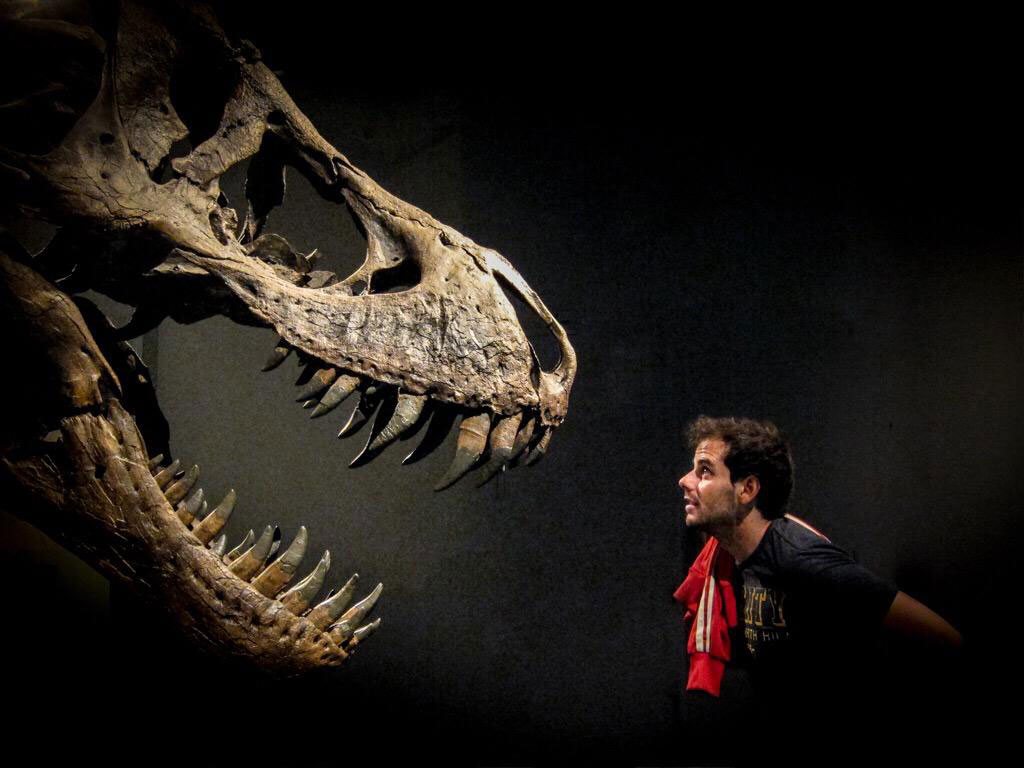 The saber-toothed cat called Smilodon had super long teeth. Its fangs could be up to 8 inches (20.3 centimeters) long! What about about other prehistoric animals?* How did their teeth compare?

*All the animals on this list were dinosaurs except Megalodon, which was a giant shark.

Don’t call them tigers! Saber-toothed cats weren’t tigers, but they were just as cool.

: an animal that eats meat : a meat eater

Can you find all the prehistoric animals hidden in this puzzle?