Have you ever seen a monarch butterfly? Monarchs, which are found mostly in North America and Central America, are famous for their beautiful orange, black, and white wings. But in the past several years, it’s been harder to find some monarchs—because there aren’t as many as there used to be. Scientists say that migrating monarch butterflies are endangered, which means they’re in danger of dying out.

The International Union for Conservation of Nature (IUCN), a group that keeps track of species populations, has added the migrating monarch butterfly to its “red list” for the first time. The red list is a list of species whose populations have fallen to the point where they are “threatened.” When something is threatened, it means that its future is not certain. There are more than 41,000 species on the red list.

According to the IUCN, the number of monarchs in North America has fallen by at least 22 percent in the past 10 years. That’s almost one-quarter of the monarch butterfly population. Scientists believe there are a few reasons for this. The butterflies have lost much of their habitat, including parts of forests where they stay during the winter. They’ve also been harmed by pesticides, which are poisons that farmers use to kill pests that eat crops. And, like many species, monarch butterflies are affected by climate change.

Not all monarch butterflies are in trouble. The problem is affecting only the monarch butterflies that migrate, or fly from one place to another each year. Every autumn, millions of these monarchs fly south, from colder parts of North America to California and Mexico, where they spend the winter. They fly north again as the weather warms up in the spring.

The migration of the monarch butterfly is thousands of miles—the longest in the insect world. The sight of the butterflies is so beautiful that crowds sometimes gather to see thousands of the orange insects sleeping in the trees.

But scientists say there are reasons to hope monarch butterflies will be around for a long time. Putting a species on the red list can make people aware that it needs help. And there are ways to help, including by protecting forests and using fewer pesticides.

Ordinary people can help too. Monarch butterflies lay their eggs on a plant called milkweed, and caterpillars (young butterflies) feed on the milkweed. People who have backyards can help monarchs by planting milkweed.

“There is still time to act,” Scott Hoffman Black, a scientist who works to help save species, told CNN.

How Far Do They Migrate? 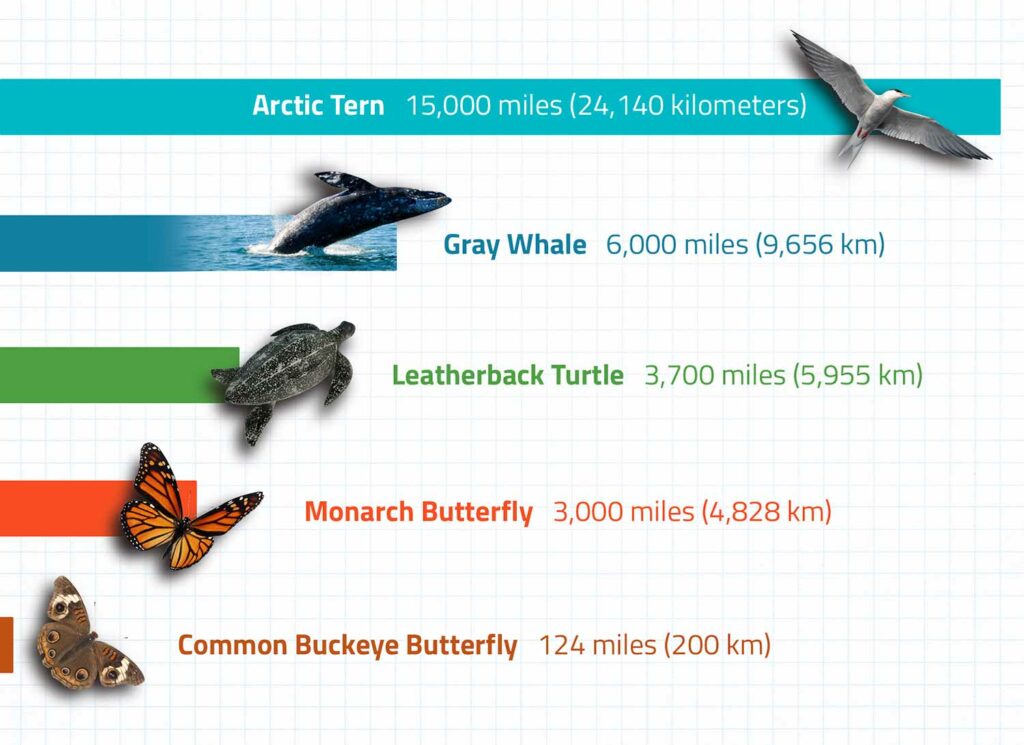 Some monarch butterflies fly as many as 3,000 miles (4,828 kilometers) to reach their winter home. If you were in a car going at top speed, it would take you about 50 hours (more than two full days) to travel that far!

The leopard lacewing butterfly (left) and the cecropia moth (right) look similar, but there are differences!

Moths are a lot like butterflies. Both have large wings. And both start out as eggs, change into caterpillars, and then become adults. But moths and butterflies aren’t the same. Here are some differences.

Butterflies are usually more colorful than moths. Moth wings may have different colors, but they’re not as bright as butterfly wings.

Butterfly antennas are thin, and the ends are shaped like balls. Moth antennas are feathery, sort of like soft combs.

More About Moths…
and Butterflies!

Do you want to learn more about butterflies and moths? Read about them at Britannica School!

: a person (such as a king or queen) who rules a kingdom or empire