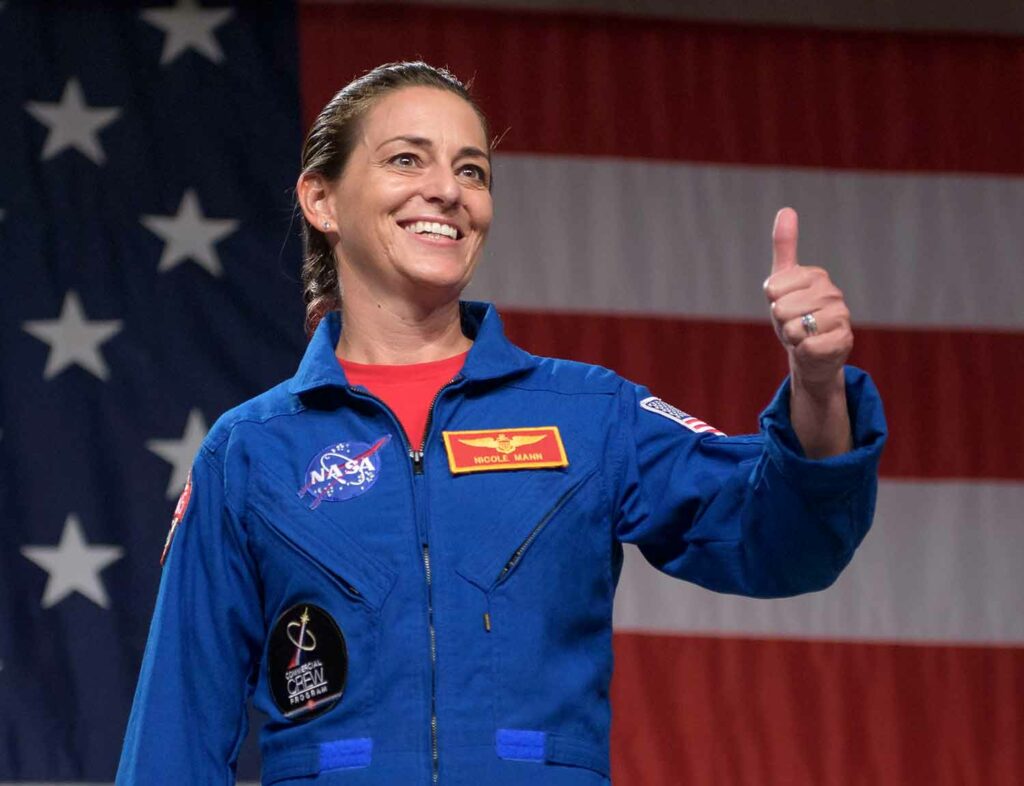 What does it take to become an astronaut? Some people fly airplanes before they train to fly on spacecraft. That’s exactly what Nicole Mann did. Mann, a NASA astronaut, is a member of the Wailacki of the Round Valley Indian Tribes. She’s the first American Indian woman in space.

On October 5, Mann and three other astronauts (one from the United States, one from Japan, and one from Russia) blasted into space. Mann was the commander on the flight from Earth to space.

The crew traveled to the International Space Station (ISS), where Mann will live for five months. The ISS is a spacecraft that orbits Earth. Astronauts from many countries live on the ISS for months at a time. While there, they do experiments and learn more about space and how to live in space.

“It’s incredible to be in space! Mom, look! I’m finally in space!” Mann said when the ISS crew had a live stream to say hello to people on Earth. 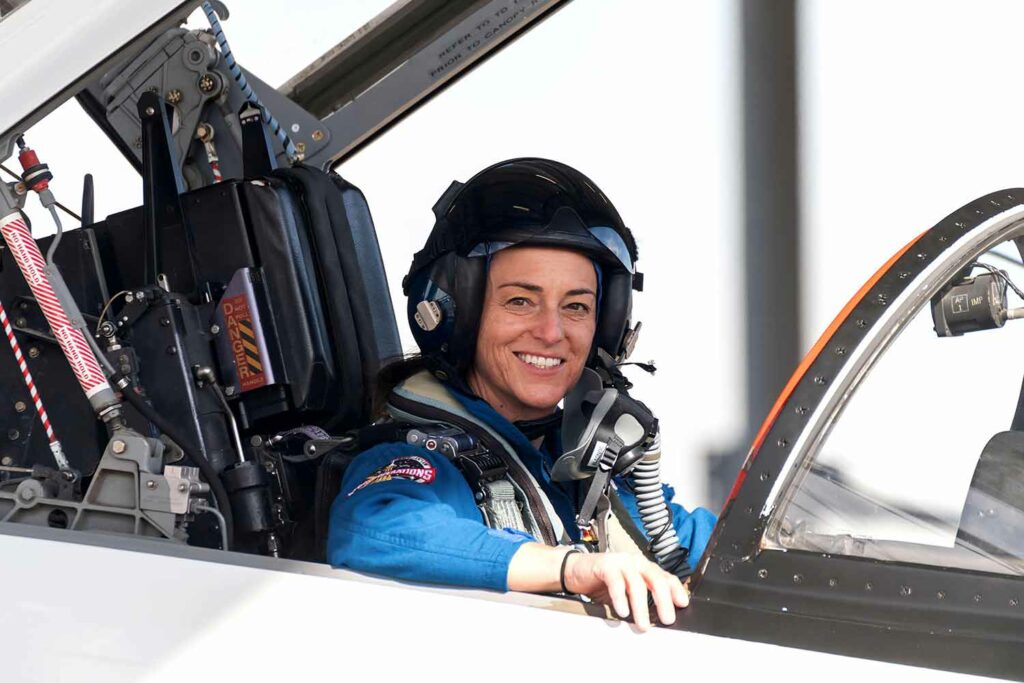 Mann said she didn’t dream of being an astronaut when she was a kid. She knew she liked math and science, and she studied a related area called engineering after college. Then she became a colonel in the U.S. Marine Corps. There, she flew many different aircraft. During this time, she started to get excited about the idea of joining NASA.

Now Mann is on top of the world—really! And this might not be her only trip to space. She’s on the list of astronauts who might go on a trip to the Moon that NASA is planning!

Did you know that astronauts get weaker when they live in space? On Earth, we use our muscles to support ourselves against the force of gravity. But there’s very little gravity in space, so astronauts don’t really use those muscles, and they can get weaker. So what do astronauts do? They exercise for more than two hours every day while they’re in space!

You can learn more about living in space by clicking here! 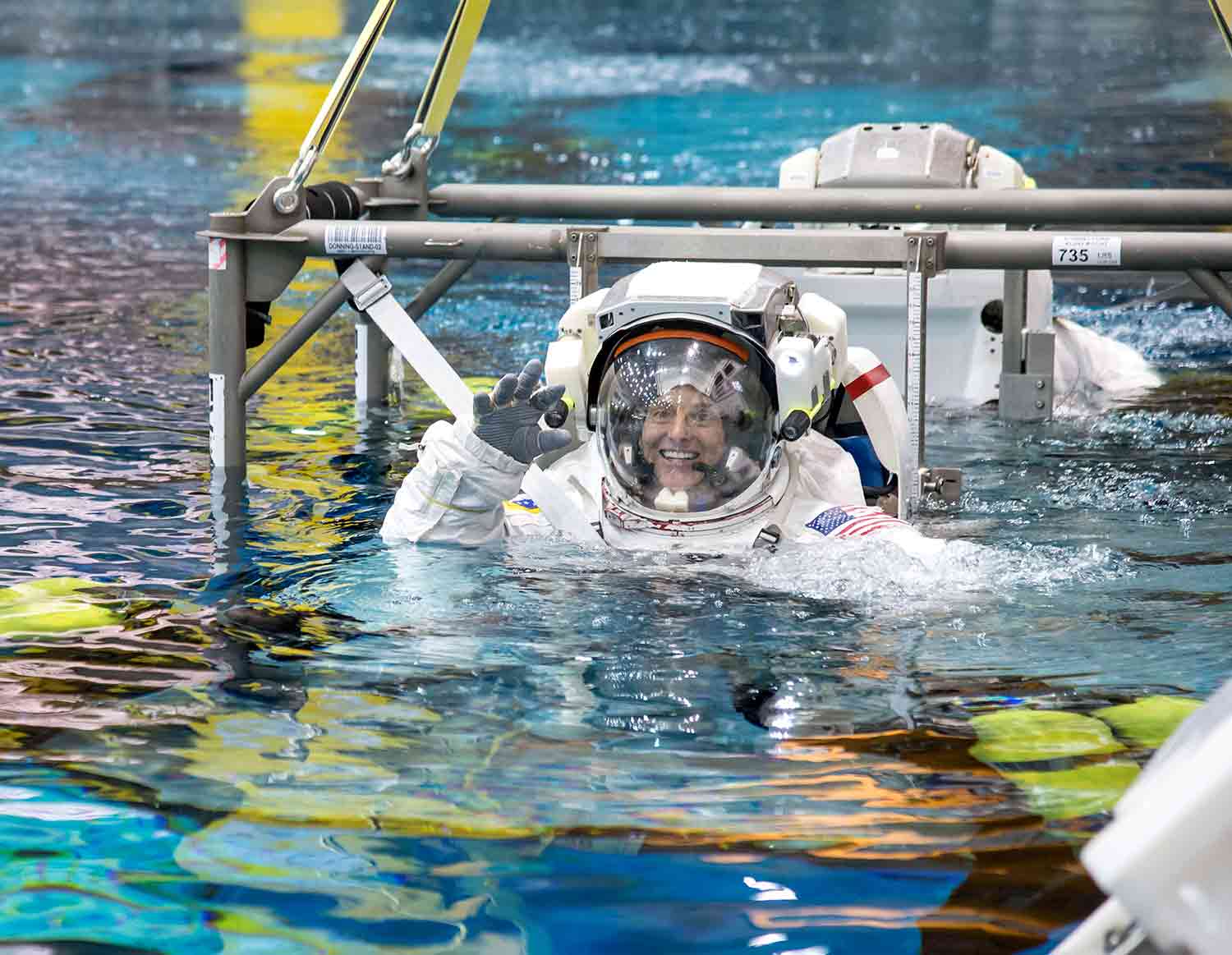 Nicole Mann learned what a spacewalk would feel like at NASA’s Neutral Buoyancy Laboratory.

Nicole Mann plans to do some spacewalks while she’s living on the International Space Station (ISS). Any time an astronaut leaves the ISS during the mission, that’s called a spacewalk. It’s like taking a walk outside, except astronauts wear spacesuits, which provide the oxygen they need. Astronauts are attached to the space station, and instead of walking, they kind of float around.

Astronauts go on spacewalks for many reasons. Sometimes they do science experiments. They want to find out how being in space affects different things. Astronauts might also test or repair equipment on a spacewalk. Sometimes the ISS itself needs a repair. In some ways, the ISS is like any other home, and all homes need repairs sometimes. But the ISS also has a lot more equipment that can break down.

Before they go to space, astronauts train to go on spacewalks. Can you guess the best way to prepare to be almost weightless? If you thought of a swimming pool, you’re right! NASA has a pool called the Neutral Buoyancy Laboratory. Astronauts practice moving around in it. But they don’t wear bathing suits. They wear spacesuits!

To the Moon…and Beyond!

U.S. astronaut Buzz Aldrin went to the Moon as part of the Apollo 11 mission in 1969.

That was more than 50 years ago. Where in space do you think we’ll go in the next 50 years? Learn more about space exploration at Britannica School!

Can you find all the words related to space exploration?