What if your school was on a boat or built out of bottles? Some kids are learning in some very unusual places!

It’s back-to-school time! Did you know that there are millions of schools in the world?

Every school is special, but some are VERY different from all the rest. Check these out!

Shishi High School in Chengdu, China, opened in 141 BCE, making it the oldest school in the world. The school’s buildings have been rebuilt a few times, but Shishi has operated in the same location for more than 2,100 years! 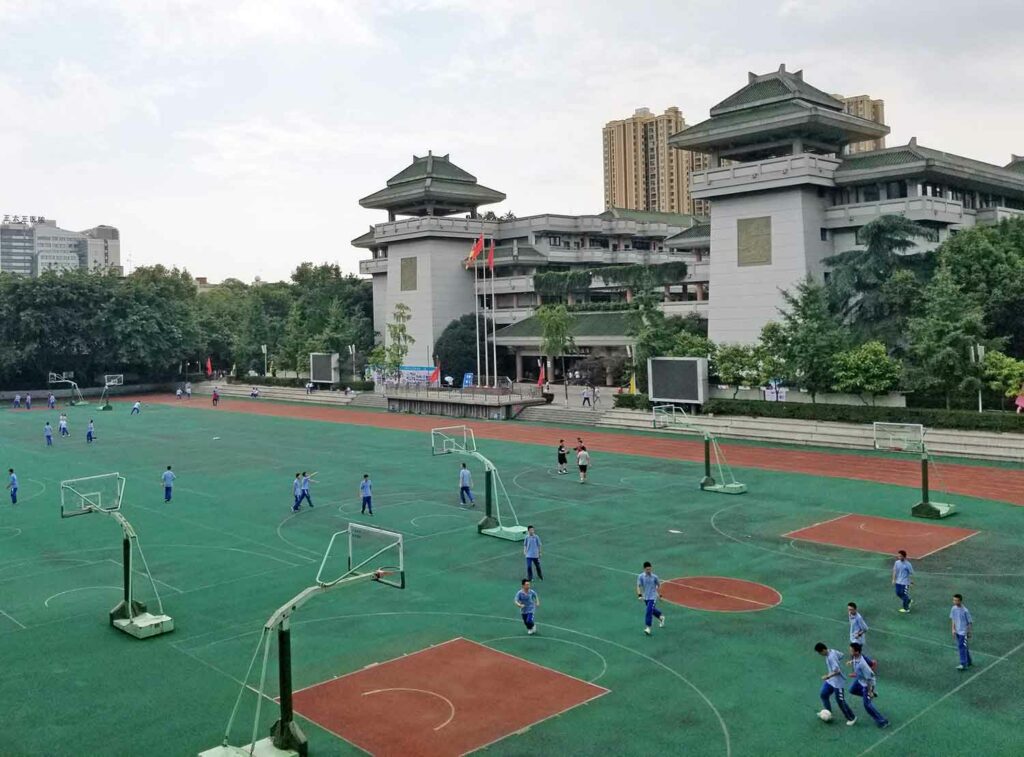 Shishi High School is the oldest school in the world. It has been in the same location for more than 2,100 years!

A school in the Philippines is made out of used glass and plastic bottles! The bottles are filled with a sand and clay mixture. This mixture also holds the bottle walls together, making them nice and strong. Why build with bottles? Recycling used materials into something new is better for the planet than throwing those materials away. It means less waste!

Flooding is common in Bangladesh, making it hard for kids to get to their schools. That’s why some kids go to school on boats! Every morning, the 23 floating schools move along rivers, picking up the students. Once the whole class is on board, the boats dock on riverbanks and school begins.

In Colombia, one village is about a two-hour walk from the nearest school. That’s because going to school on foot means climbing down the side of a mountain and trekking across a canyon. Luckily, the kids from this village don’t walk to school. Instead, they take a zipline across the canyon! (The younger kids are always accompanied by a teen or an adult.) A person on a zipline can travel about as fast as a car. 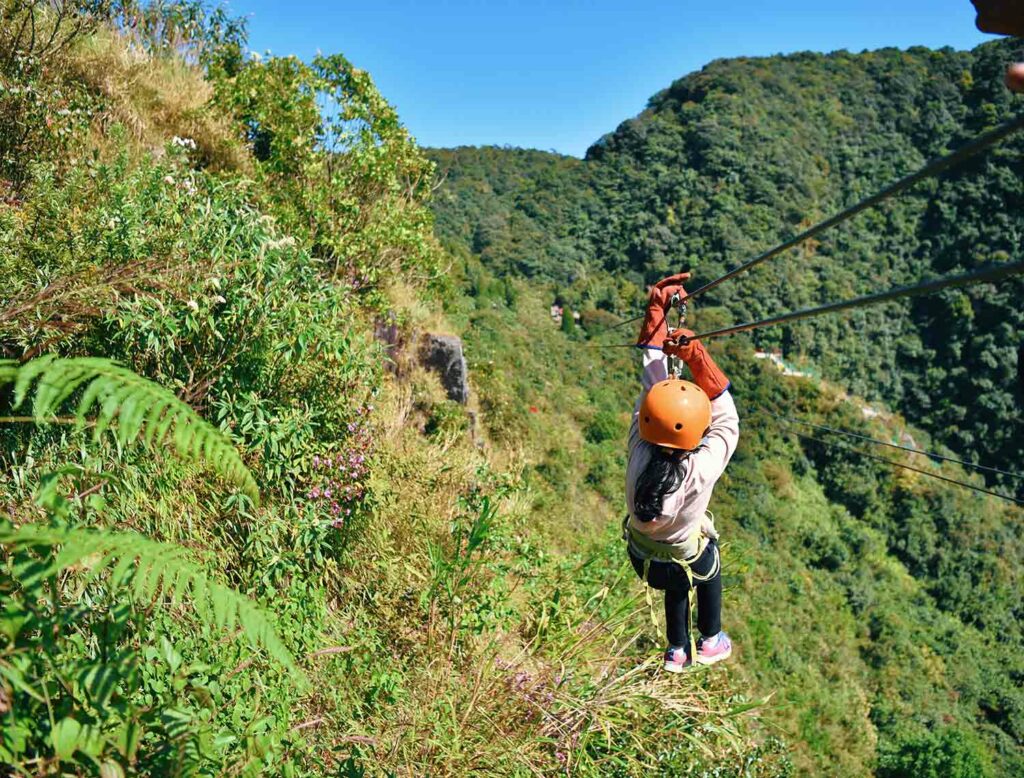 A zipline can be a fast way to cross a valley.

If you have a new pencil, it will last a long time before it gets too short to use. The average pencil can write 45,000 words. It can draw a line that is 35 miles (56.3 kilometers) long! That’s longer than the distance between Fort Worth and Dallas, Texas.

Way Back to School 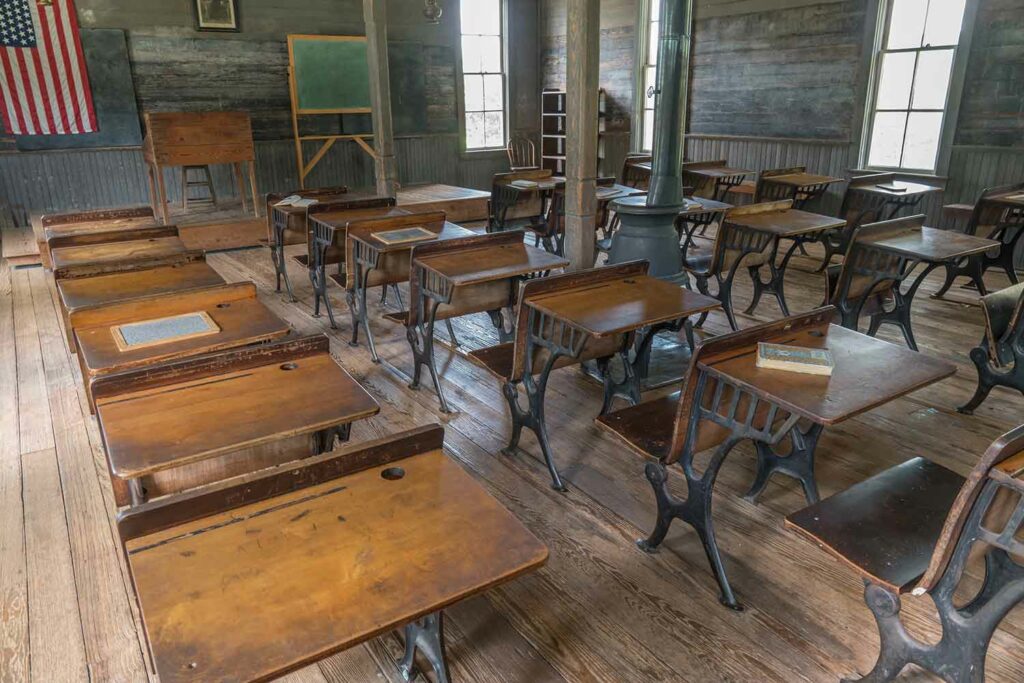 In the 1800s, many American kids went to school in a one-room schoolhouse like this one.

What’s your school like? Back in the 1800s, many American kids, especially kids who didn’t live in cities, attended school in a one-room schoolhouse. One teacher taught all the kids in the school.

In some ways, classrooms in the 1800s were similar to today’s classrooms. Students sat at desks, and there was usually a larger desk for the teacher. But schoolrooms were different in many ways, too. There was no electricity and no central heating. In the middle or back of the room, there was a stove that burned wood to keep everyone warm. Someone had to chop the wood for the stove. That person was often the teacher!

In the 1800s, schools did not have indoor bathrooms. Instead, they had a privy or outhouse. This was a small building located somewhere near the schoolhouse. There was no plumbing, so you couldn’t flush anything!

Today, most U.S. schools are open between August or September and May or June. But in the 1800s, the school year was different. For example, Wisconsin schools had two “terms.” The winter term lasted from November to April. The summer term lasted from May to August. Outside of cities, many families had farms. Boys from farming families often did not attend school for months at a time. They had to help their parents prepare fields for planting and then harvest, or pick, the crops.

In the early 1800s, most teachers were men. By the 1860s, though, more women became teachers. Women teachers were not allowed to be married. If they got married, they had to quit their jobs. In many towns, the teacher lived with a local family.

In the 1800s, paper was expensive, so many students used it only when they took tests. Most of the time, they wrote on slates, which were small chalkboards. Slates could be wiped clean and used again and again. Books were also expensive, so students often shared them instead of having their own.

: a person who has studied a subject for a long time and knows a lot about it : an intelligent and well-educated person who knows a particular subject very well

Can you find all the school words?